Cherry Flamusse:   291 calories     5.3 g fat    2.2 g fiber   15.4 g protein   46.7 g carbs [34 g Complex]  316 mg Calcium   GF – if using GF flour   This breakfast custard is borrowed from the dessert section of the cookbook, and it works very well either way! It is similar to a clafouti, but simpler. Served with cherries or any fresh fruit, it is sure to be a hit. HINT:This makes enough for 2 [two] servings: share with a a friend or save the rest for a future breakfast or dessert. [Without the morning beverages, the dessert has 177 calories.]

Spritz 2 ramekins [or an oven-proof dish with 1.5 cup capacity] with non-stick spray. Cut the cherries in half and arrange on the bottom of the dish. Whisk eggs until foamy, then add flour and sugar, whisking until there are no lumps. Stir in the milk and pour the batter over the cherries. Bake at 375 F. for 20 minutes. Turn the flamusse out of the dish so that the cherries are on top. Plate with the clementine sections, serve with the beverages. You won’t believe this is a ‘diet.’ 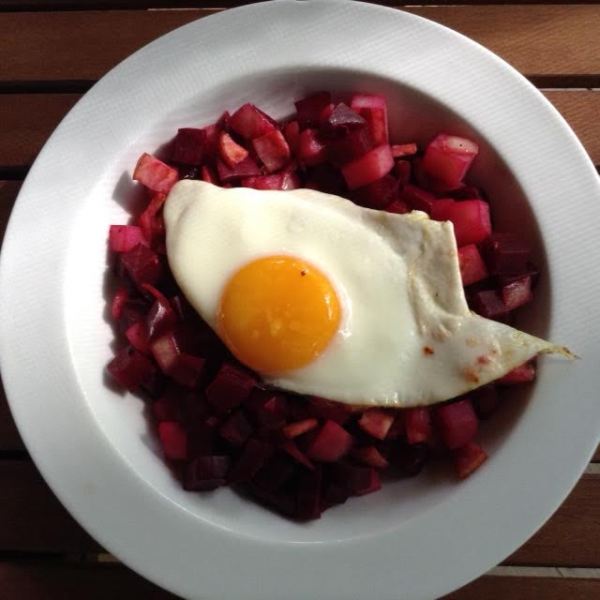 Cook, peel, and dice the beets and set aside to cool. [HINT: do this the day before]  Peel and dice the potatoes. Put potatoes into a pan of tap water and put the pan on the burner. Turn on the heat and let the pan sit, uncovered, for 10 minutes or until the water starts to boil around the edges. Take off the heat and leave potatoes to cool in the water. Then drain and set aside. Dice the onions and bacon. Spray a saute pan with non-stick spray and add the Canadian bacon. Cook it as crisp as you wish, or not so crisp. Remove the bacon and set aside. Add the onions with 2-3 Tbsp water, and cook until the onions are transluscent and the water is mostly gone. Now put the potatoes in the pan with the onions, add salt and pepper to taste. Stir until the potatoes are cooked. Add the beets and bacon to the pan and continue to cook until heated through. Meanwhile, fry the egg: sunnyside-up or over easy as you prefer. Plate the hash and top with the egg. Country dining.

Join 326 other followers
Follow Eating well, with creative recipes, to follow the Fasting Lifestyle according to Michael Mosley's "Fast Diet." on WordPress.com