How this Fast Diet Lifestyle works: Eat these meals tomorrow. On Thursday, eat the meals that will be posted on Wednesday.  Eat sensibly the other days of the week.  That’s it.  Simple way to lose weight and be healthier.

In the year 122 Common Era [that’s AD to some people], Emperor Hadrian decided that he needed a wall. Most likely you have heard of it: it stretches from coast to coast in northern England, 84 miles of Roman might.  Most of us think that it was designed to keep the Scots and Picts OUT of the Empire. But as I learned when I hiked the Wall in May, its purpose was simply to regulate trade. Why else would the Wall have gates all along its length? And how could those disparite tribes have challenged the might of 2600 cavalry troops stationed there?  Trade rights. It all boiled down to commerce.  Now we have treaties to deal with such matters, and eventually the wall was torn down.

I had a real adventure hiking the Wall with two cousins. Beautiful countryside and some good food. In honor of Hadrian’s Wall, some UK-inspired food from both sides of the divide. Perhaps food and a need for it will unite people across borders. 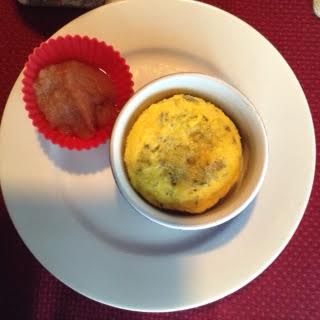 Cook the mushrooms [if raw] by poaching in a little hot water for a minute, then chop. Chop the sausage. Spritz a ramekin with oil or non-stick spray and put the sausage and mushroom into it.  Set the toaster oven at 350 degrees. Whisk the egg with the cheese, and pour into the ramekin. Bake for 12-15 minutes.  Spoon out the applesauce; pour the beverages. Happy breakfast.

Rumbledethumps:   243 calories   10 g fat   4 g fiber  12.6 g protein   19.5 g carbs   171.4 mg Calcium   PB GF  Where do you get a recipe with a name like that? Sundays At Moosewood, of course. Hearty meals like this, made with winter vegetables are common in Scotland and Ireland. HINT: The recipe makes enough for 2 servings. Wrap half in cling-wrap and foil and freeze for another dinner. Very handy to have stashed in the freezer. 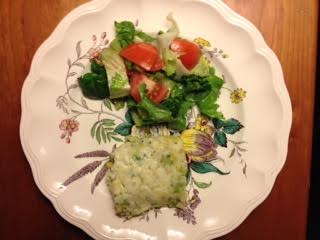 Cut potato into chunks. Boil and mash with the milk, butter, and mace. Let cool. Steam the cauliflower, cabbage, leek, and broccoli until cooked. Take off the heat. Remove the cauliflower when it is very soft and mash it into the mashed potatoes. Whip the eggwhites until stiff and fold into the potato/cauliflower mash. Taste for salt and pepper. Gently stir in the remaining steamed vegetables. Smooth into a lightly-spritzed baking dish. [choose the dish with the idea that you will be dividing this into 2 equal portions] Sprinkle with the grated cheese and bake at 350 degrees F. until the cheese is bubbly and just starting to brown. Whisk the oil and vinegar together and toss in the greens. Serve the cool, crispy salad with the hot, creamy rumbledethumps. Good food.