How this Fast Diet Lifestyle works: Eat these meals tomorrow. On Thursday, eat the meals that will be posted on Wednesday.  Eat sensibly the other days of the week.  That’s it.  Simple way to lose weight and be healthier.

Agnes was a child who, after being murdered in a Roman persecution, became a saint. Her innocence attracted a cult of followers and her feast day, January 21, has been celebrated since the 4th century. One aspect of her veneration involves young women traditionally following a ritual of fasting on January 20 in the hopes of dreaming of their future husband.  John Keats incorporated this in his Romantic poem The Eve of St Agnes. It tells the tale of star-crossed lovers, Madeline and Porphyro.  She fasts and falls asleep.  Porphyro sneaks into the castle and gains admittance to her chamber with the help of Angela, the old Nurse [further shades of Romeo and Juliet]. While Madeline sleeps, her would-be lover sets a fantastic feast of expensive delicacies in her room.  She wakes, sees the object of her dreams [the guy not the goodies], and they escape to his castle to get married.  All rather racy for a poem related to 13-year-old Agnes. The name ‘Agnes’ is Greek, meaning ‘chaste’ but it is similar to the latin word for ‘lamb.’  Therefore the innocence of Agnes and of little lambs is forever linked.

Porphyro’s Picnic:   252 calories  5.7 g fat   6 g fiber   6.5 g protein   53 g carbs [43 g Complex] 128 mg Calcium   PB GF V  This is based on the foods described by Keats in his romantic poem  The Eve of St Agnes.  The meal is rather sweet despite its low calorie count – perhaps it needs some other taste to cut it. A cup of black coffee? Full of fiber, this meal is sure to kick-start your tally of fruits/vegetables for the day. 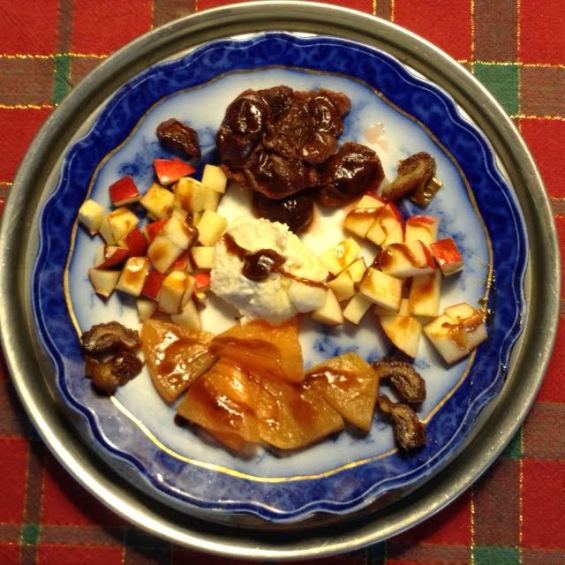 Stir the yogurt and almond meal together and spoon onto the center of the plate. Chop the apple, cube the melon, and arrange them around the almond cream, along with the plums. Place the pieces of date at random. Combine the cider syrup with the cinnamon and drizzle it over the apple and melon. All set to eat and you still have 48 calories left over. Not responsible for what happens if you eat this by moonlight on January 20. 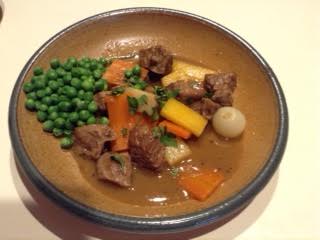 Sear the cubed lamb on all sides [about 3 minutes] in a heavy pan which has been sprayed with non-stick spray or oil. Cook the meat in batches so the pan doesn’t cool down. Remove the cooked meat to a Dutch oven and sprinkle with salt and pepper. Put the onions in the same cooking pan and sauté them with enough water to make them sizzle. When the onions are transparent, add the wine to deglaze the pan, stirring the brown bits up from the bottom. Heat the oven to 350 F. Sprinkle with the flour and stir to mix. Add to the Dutch oven. Pour in enough cold water to go to the top of the lamb but not cover it. Stir in the thyme and bay leaf. Heat to a simmer on top of the stove on medium heat. Then cover and put the casserole in the oven. Bake 1 hour, checking once in a while to adjust the temperature to make sure the stew is not boiling. After 1 hour, add the carrots, put the cover back on and bake for 15 minutes. Add the potatoes, put the cover back on and bake for 45 minutes. Remove the bay leaf. While the potatoes are baking, put the pearl onions and turnips in a small non-stick pan with the sugar and butter** and enough water to rise half-way up the onions. Simmer for 10 minutes, uncovered and shaking the pan ocaisionaly. Add salt and pepper. Reserve, off the heat until the lamb is cooked. Plate the stew with the vegetables, adding the optional peas if you wish.  [add ___ calories and ___ g fiber]

** If you were to cook the onions and turnips without the butter and sugar, you would reduce the calories to 297 and the fat to 6.3 g.