Children’s and Household Tales were first published on December 20, 1812.  Wilhelm and Jacob Grimm did not intend their work as happy bed-time stories for children. Their intent was to collect German folktales before they disappeared in an increasingly industrial society. The stories were to re-educate the German public about their cultural past and to earn money for their impoverished brothers and sister. [Food or a lack thereof is a constant theme in their stories.]  The book was a best-seller, partly due to the fact that it fit well with the Romanticism of the era: stories set in the wild forest; tales that harked back to a simpler if not a kinder time. Popular in our own time, ‘fairy tales’ show us the darker sides of human nature, but in the end things usually work out. That’s reassuring.

In the theme of Grimm’s tales, we will eat porridge for breakfast — but not cook it to excess as in the story Sweet Porridge.  We will know when to stop. Many of the stories take a truly gruesome turn as in The Juniper Tree [a film Disney will never make!], so we will have organ meats in the form of haggis spring rolls for dinner. Re-read some of the works of the Brothers Grimm today. 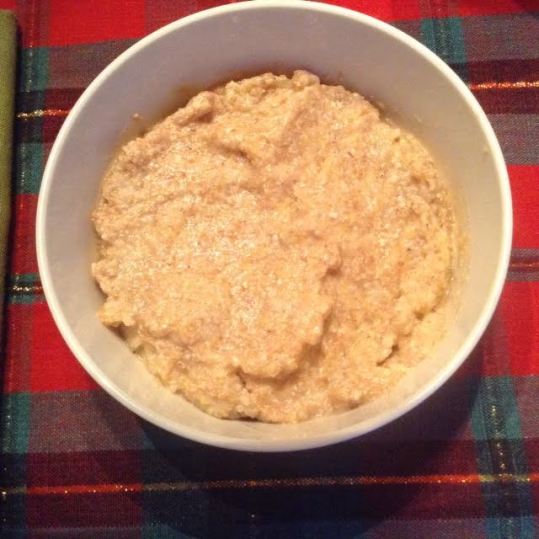 Put the cereal in 3/4 of a cup of boiling water, turn down to a simmer and cook, covered, for 8 minutes. HINT: Do this the night before. Cool the cereal, then mix in the cottage cheese, maple syrup, applesauce, and spices until well-combined.  Put into a microwave-save bowl and cook in the microwave for 45 to 60 seconds [if cold from last night] OR for 30 seconds until hot through. Pour the beverages and you will have a warm, filling start to your day.

Haggis Spring Rolls:  262 calories  12.8 g fat  2.8 g fiber  23 g protein  26 g carbs  41 mg Calcium The first time I enjoyed these was at the Whiski Rooms in Edinburgh, along with a wee dram of single malt. Today, the whisky is in the dipping sauce to complete the fusion of Asian-Scottish flavors. This meal has my husband’s approval.

Put water into a wide, shallow dish such as a pie plate. Lay a tea towel on the counter. Place onespring roll wrapper in the water. Initially, the wrapper will look like a piece of thin, stiff, whitish plastic. Soon it will become more transparent, colorless, and pliable. Remove it from the water while still a little stiff [do NOT let it become limp] and lay it on the tea towel. Place 2 Tbsp haggis filling on the lower 1/3 of the wrapper, arranged as a little log. Roll it up, folding the sides in after the 1stturn. Move finished roll to the side as you repeat the steps. Heat a 10” cast-iron skillet over medium flame and spray with non-stick spray. Place the spring rolls in the pan with room between them. Cook slowly on one side, then roll onto another side. Continue until all the rolls are browned on each side. Prepare the salad and plate it. Combine the chili sauce and the whisky in a dipping cup. Plate the haggis, and try not to read Grimm’s Fairy Tales while you dine.

Ingredients for next week: