Tomorrow in Mexico people will observe the Day of the Dead. While this sounds macabre to non-Mexicans, it is a family day for visiting cemeteries and honoring the dead, as seen in the movie Coco. Our meals today have a theme of death/celebration /Mexico, told in two stories.  No sugar skulls or pan dulce for a Fasting Day.

Placerville, California was a mining town, named after ‘placers‘ which are gold nuggets found in stream gravel.  Incorporated in 1854, it was formerly called ‘Hangtown‘ since frontier justice was doled out there. Often. One day a Sourdough [if you think that’s a loaf of bread, follow the link] walked into a hotel.  Bragging that he had struck it rich, he demanded the most expensive meal they could serve him.  What was it?  Eggs [the going price was 1 small gold nugget per egg], bacon [also a scarce commodity], and tinned oysters [an extravagance!]. It was dubbed the Hangtown Fry.  You can still order it in Placerville, and tho’ the locals think it is awful, we found it to be delicious.

‘Enchiladas’ are as Mexican as can be. The name derives from the origin of the dish: ancient Aztecs prepared corn tortillas and dipped them in chili sauce before frying them on a griddle.  In Rick Bayless‘ words, the tortillas were “en-chilied”, or enrobed with chilis: hence ‘tortillas enchiladas.’ So enchiladas are not a meal, they are an ingredient. The Enchiladas Suizas which we offer for dinner, were first offered in the 1950s in Mexico City. The name means ‘Swiss Enchiladas’ due to the cheeses inside. They are easy to prepare and fun to eat. 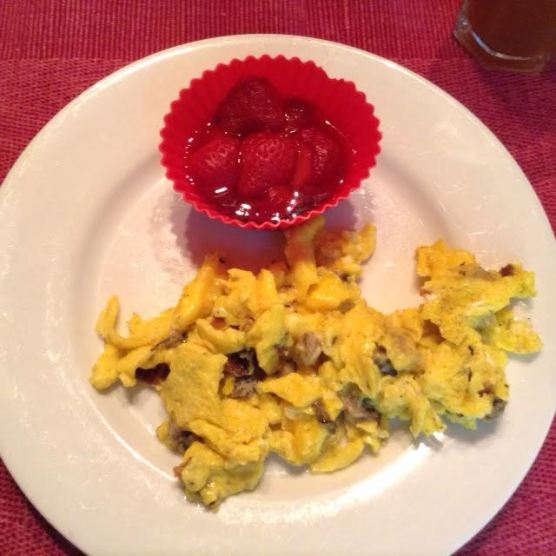 Dice the bacon and cook it in a hot pan until almost crisp. Add the oysters and cook a second or two longer. Whisk the eggs with salt, and pepper. Pour over the bacon/oysters in the pan and scramble or cook as an omelette. Plate with the fruit and serve with the beverages of choice. Full of flavor.

Heat oven to 350 F. On an ungreased heavy skillet, place the tortillas and cook them until they begin to brown on one side. Flip in the pan and continue until each tortilla is pliable and slightly fragrant. Remove to a cutting board or baking sheet. Distribute the chicken between the tortillas, then roll up the tortillas, and place each in an oven-proof dish, seam-side down. Spoon the sauce over and around and between the enchiladas. NB: you don’t have to use all of the sauce. Extra could be added to eggs or soup. Sprinkle with cheese and put into oven. Cook the vegetables, drain and dress with salt and a splash of red wine vinegar. So good!