On 11 July, 911 AD, we find ourselves in the region of Eure in the lower Seine valley. The Viking Rollo [Hrolf to his family] and his merry band of mauraders had made a sweet deal with the locals: you French give us the lower Seine River and the coastline, and we’ll stop raiding you. King Charles the Simple and his advisors agreed to the deal, and Rollo, a giant of a man who was so large that no horse could hold him [hence his nickname “The Granger” or Walker], became Duke of Normandy.   The day almost ended badly.  The haughty King Charles told his new vassal to kiss his foot.  The unbowed Rollo refused but told one of his henchmen to do it for him.  The henchman, unwilling to bow to honor the king’s foot as he sat astride his horse, instead grabbed the foot and raised it to his lips, almost tipping the king over!   Rollo was generous to his followers, and gave much land to his half-brother, Bernard, called ‘The Dane’ even though he was from Norway.  Bernard is my direct ancestor and he settled the town of  Thury which is named after his battle cry: Thor-aie!  The family name became ‘Harcourt‘, also a place name in Normandy and a well-known name in England. Rollo’s great-great-great-grandson became William the Conqueror, but that’s for another day.

Since Rollo and Bernard woke up on July 11 as Norsemen, we will enjoy marinated herring for breakfast.  Since they went to bed on July 12 as Frenchmen, we will dine on crêpes made with Jarlsberg cheese, because Rollo and Bernard’s father was ‘Jarl’ [earl] of Møre, Norway. Enjoy your Fast Day, and shout ‘Thor-aie!!”

Herring Plate: 292 calories  8.4 g fat  4.9 g fiber  12.6 g protein  32.8 g carbs  199 mg Calcium PB  If you like herring, this is the breakfast for you. It makes a nice change from morning eggs and this is prepared in no-time-flat. Get your doctor’s OK to eat herring if you are taking a MAOI antidepressant medicine, as herring is high in tyramine. 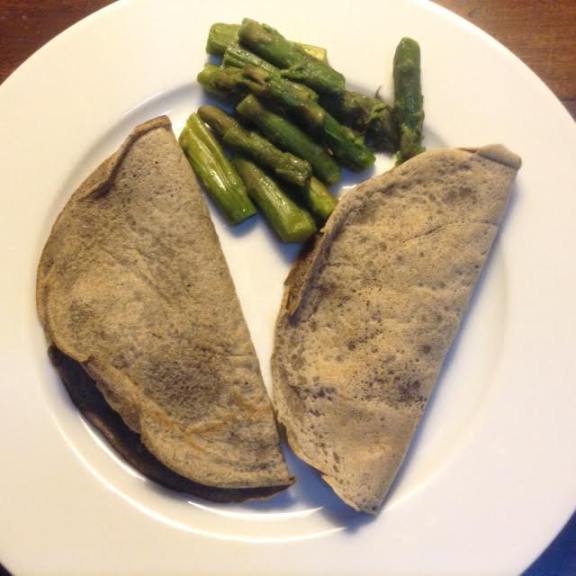 If the crêpes are in the freezer, thaw draped with a tea towel. If the crepe batter is frozen, thaw it, then cook the crepes, keeping them warm in a tea towel. Dice or grind the ham and grate the cheese. Combine ham, cheese, and Béchamel sauce. Divide it between the crepes and warm in a slow oven until warmed through and the cheese is melty. Cook the asparagus OR Whisk the salad dressing, then toss with the lettuce and tomato. Simple and good to eat.