How this Fast Diet Lifestyle works: Eat these meals tomorrow, for a calorie total of less than 600. On another day this week, eat the meals from a different post, another day of eating 600 calories or less. Eat sensibly the other days of the week. That’s it. Simple way to lose weight and be healthier.

“Savory” is the name for two different herbs: Summer Savory [Satureja hortensis] and Winter Savory [Satureja montana]. “Savory” connotes a rich blend of pleasing flavors. Today, we mean the latter.  Here are three savory, succulent fillings, which are versatile enough to use for breakfasts, to flavor baked eggs or an omelette; or at dinner, when they are so easy to fold into crêpes.

Ingredients for next week:

On 11 July, 911 AD, we find ourselves in the region of Eure in the lower Seine valley. The Viking Rollo [Hrolf to his family] and his merry band of mauraders had made a sweet deal with the locals: you French give us the lower Seine River and the coastline, and we’ll stop raiding you. King Charles the Simple and his advisors agreed to the deal, and Rollo, a giant of a man who was so large that no horse could hold him [hence his nickname “The Granger” or Walker], became Duke of Normandy.   The day almost ended badly.  The haughty King Charles told his new vassal to kiss his foot.  The unbowed Rollo refused but told one of his henchmen to do it for him.  The henchman, unwilling to bow to honor the king’s foot as he sat astride his horse, instead grabbed the foot and raised it to his lips, almost tipping the king over!   Rollo was generous to his followers, and gave much land to his half-brother, Bernard, called ‘The Dane’ even though he was from Norway.  Bernard is my direct ancestor and he settled the town of  Thury which is named after his battle cry: Thor-aie!  The family name became ‘Harcourt‘, also a place name in Normandy and a well-known name in England. Rollo’s great-great-great-grandson became William the Conqueror, but that’s for another day.

Since Rollo and Bernard woke up on July 11 as Norsemen, we will enjoy marinated herring for breakfast.  Since they went to bed on July 12 as Frenchmen, we will dine on crêpes made with Jarlsberg cheese, because Rollo and Bernard’s father was ‘Jarl’ [earl] of Møre, Norway. Enjoy your Fast Day, and shout ‘Thor-aie!!”

Herring Plate: 292 calories  8.4 g fat  4.9 g fiber  12.6 g protein  32.8 g carbs  199 mg Calcium PB  If you like herring, this is the breakfast for you. It makes a nice change from morning eggs and this is prepared in no-time-flat. Get your doctor’s OK to eat herring if you are taking a MAOI antidepressant medicine, as herring is high in tyramine. 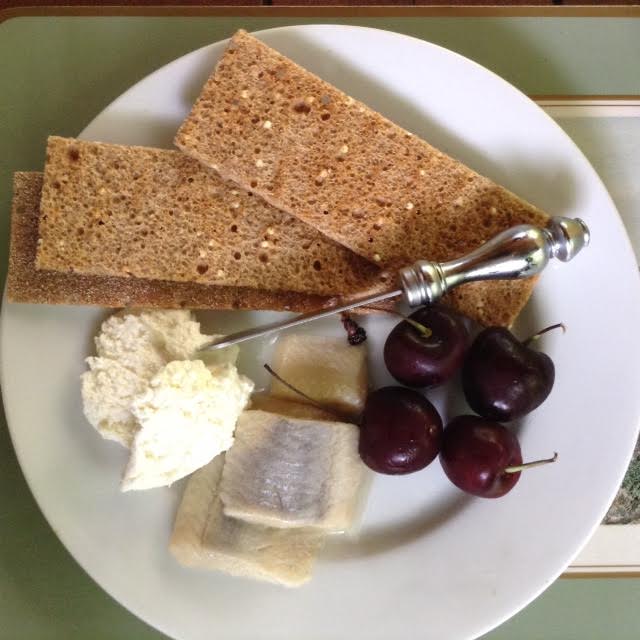 If the crêpes are in the freezer, thaw draped with a tea towel. If the crepe batter is frozen, thaw it, then cook the crepes, keeping them warm in a tea towel. Dice or grind the ham and grate the cheese. Combine ham, cheese, and Béchamel sauce. Divide it between the crepes and warm in a slow oven until warmed through and the cheese is melty. Cook the asparagus OR Whisk the salad dressing, then toss with the lettuce and tomato. Simple and good to eat.

How this Fast Diet Lifestyle works: Eat these meals tomorrow. On Monday, eat the meals that will be posted on Sunday. Eat sensibly the other days of the week. That’s it. So easy.

“Gimme a ‘C’!!” the cheerleaders used to yell at my high school. Whether or not that made the ‘Thundering Herd’ fight harder is unknown.  Is it time for you to ‘fight harder’ in your quest for improved health?  If so, I propose some foods which are sure to please: delicious and low in calories.

HINT: dice all the vegetables and bacon the night before to save time in a.m. Spritz a saute pan with non-stick spray and add the chopped veg and bacon. Add the seasonings. Saute until beginning to brown. Whisk the eggs and pour them over the cooked ingredients. Sprinkle the cheese on top and scramble the eggs until done as you like them. Plate with portioned pear and your beverages of choice. Off to a tasty start. 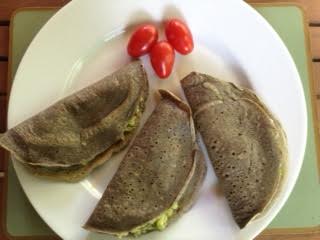 Prepare 3 crêpes and lay flat on a baking sheet. Warm the oven to 320 degrees. Chop the broccoli and dice the meat. Stir together with the bechamel sauce. Add salt/pepper/herbs to taste. Divide the mixture among the crêpes. Fold the crêpes over and press gently. Cover the crêpes with foil so they don’t dry out and heat until warmed through, about 15 minutes, but don’t let them dry out. Plate with the tomatoes. Voilà!

A sphere, as we all know, is a 3-dimensional, round shape.  Some people might describe their body shape as spherical.   In geometry, a hemisphere is half of a sphere.  In geography, a hemisphere means dividing the globe into two parts: either northern vs southern hemisphere; or ‘eastern’ vs ‘western’ hemisphere. [I put those in quotes since they are a matter of perspective — where does East begin???]  We have been enjoying foods from several hemispheres while enjoying the fact that the body has become less spherical. Have you seen results, too?  Today’s foods celebrate hemispheres in their shape.  What shape would you like to be?

Combine the cheeses, mushrooms, garlic, spinach, and flavorings. Spritz a 4” custard cup with non-stick spray and spread the cheese mixture evenly in the bottom. [I was cooking for 2 and used an oval 5×7” baking dish] HINT: do this the night before and leave on the counter. Set the oven for 375 degrees F. Beat the eggs until broken up and frothy. Pour over the spinach/cheese mixture and bake for about 20 minutes. Meanwhile, prepare the beverages and plate the grapes. Breakfast is great.

Join 329 other followers
Follow Eating well, with creative recipes, to follow the Fasting Lifestyle according to Michael Mosley's "Fast Diet." on WordPress.com