If I said “Raffles,” would you think of buying a ticket for a prize at a charity event?  If you had thought internationally, you would think of Sir Thomas Stamford Raffles; and Singapore; and the Raffles Hotel; and perhaps a well-known beverage.  Sir Thomas was born July 5, 1781, to a merchant ship captain who never found success.  His son’s story was like a Horatio Alger tale as told by Dickens.  Young Tom became an apprentice and worked his way up to be tapped by the East India Company as the right sort of fella to find a new trading port in the “Orient.”  Under his directions, a tiny town became Singapore, now an independent city-state on the Strait of Malacca.  In 1887, the Sarkies brothers started a hotel in Singapore and named it The Raffles Hotel.  The hotel became famous, associated with comfort, international trade and intrigue, as attested by films shot there.    And then there is the famous cocktail, the Singapore Sling, said to have been invented in the Raffles Bar.
Our menu today is typical of the foods of singapore.   Breakfast is based on a well-loved street food, while dinner is the ultimate ‘melting pot’ meal of the Malacca crossroads: Dim Sum. 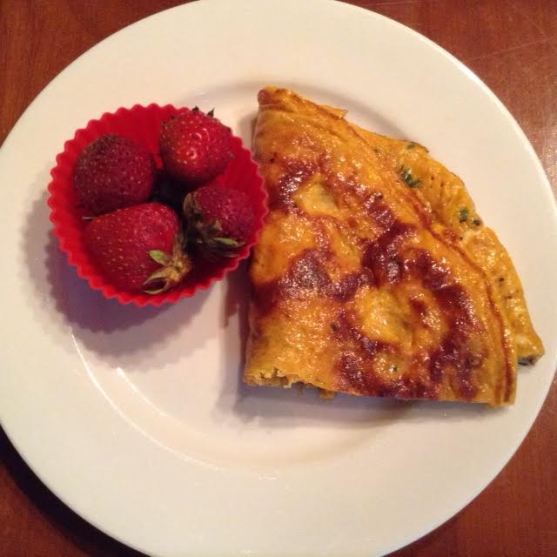 Combine the catsup, chili paste, soy sauce, crab, and garlic, stirring well to mix thoroughly. Heat a non-stick pan and spritz with non-stick spray. Whisk the eggs with the seasonings and pour quickly into the pan. Put a lid on the pan and cook undisturbed until the eggs are cooked and set. Fold the eggs as you plate them with the berries. The beverages of your choice will round out the meal. 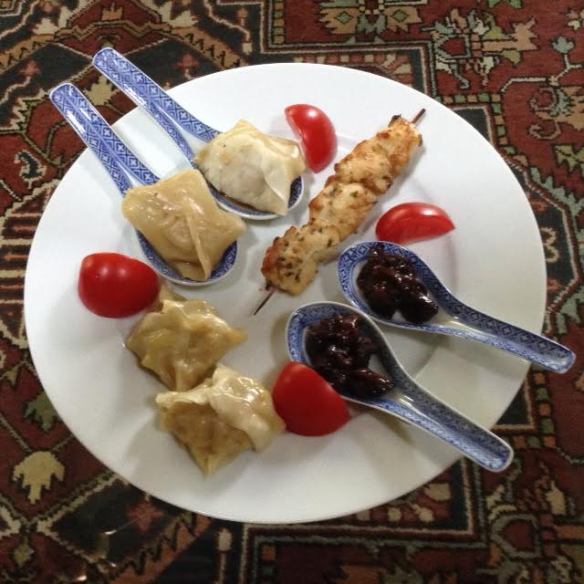 Thaw the chicken. Cream the Satay Sauce with the peanut butter and mix with the chicken meat. Let sit several hours. Thaw the momos, the wontons, and the pork. Combine the stock with 2 tsp water and put the wontons in the broth. Put over heat until the wontons are heated through. Remove them and continue to heat the stock until reduced back to 2 tsp. [Using ceramic soup spoons, I put 1 tsp of stock in each spoon and topped it with a warm wonton.] Thread the chicken onto a skewer and broil for 10-15 minutes, turning to cook the other side. Place the momos in a steamer for about 15 minutes, until they are cooked through and the wrappers are translucent. Heat the pork in the microwave for about 1 minute. Slice the tomato and plate the Dim Sum components in the manner of your choosing.