Tomatoes are such a ubiquitous food that it is hard to imagine a time when they were absent from world-wide cuisine and even feared as poisonous.  Tomatoes are native to South America, where they might still be growing wild in Peru. They were introduced to Europe in the 1500s by Cortès.  Botanically, they are members of the Nightshade Family, which includes the known poison deadly nightshade. Due to that association, this untried fruit was viewed with suspicion. But a few intrepid biologists/physicians/cooks were convinced that they were safe to eat, and their use caught on in Europe.  On July 28, 1820, Robert Gibbon Johnson in Salem, New Jersey made a rash announcement: he would sit on the courthouse steps and eat tomatoes!!  A crowd gathered, thinking/fearing/hoping [?] that he would die.  He didn’t and thereafter, tomatoes grew in gardens and in popularity.

Our meals today feature the famed ‘love apple’, with eggs and enchiladas. 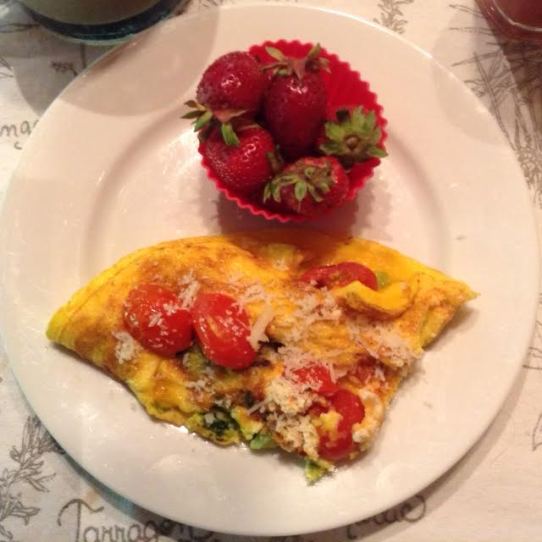 Dice the tomato and drain in a strainer, overnight if possible. Drain the cottage cheese overnight if it is very liquid. Steam the broccoli and chop it finely. Chop the black olive. Into a hot saute pan spritzed with non-stick spray, add the tomato, broccoli, and olive. Stir until warmed. Whisk the eggs with the cottage cheese and pour over the vegetables in the pan. Scramble or fold as an omelette, hence ScrOmelette, and sprinkle with the Parmesan cheese. Prepare the beverages and plate the berries. Bliss.

Heat oven to 350 F. On an ungreased heavy skillet, place the tortillas and cook them until they begin to brown on one side. Flip in the pan and continue until each tortilla is pliable and slightly fragrant. Remove to a cutting board or baking sheet. Distribute the chicken between the tortillas, then roll up the tortillas, and place each in an oven-proof dish, seam-side down. Spoon the sauce over and around and between the enchiladas. NB: you don’t have to use all of the sauce. Extra could be frozen or added to eggs or soup. Sprinkle with cheese and put into oven for 20 minutes.  Cook the vegetables, drain and dress with salt and a splash of red wine vinegar. So good!