Jacques-Yves Cousteau — you know who he is.  If you are part of my generation, your interest in environmentalism and the ocean are probably due to him. Back when I was teaching Oceanography, everyone knew his name.  He was born on June 11, 1910 in South-Western France. While growing up, he loved swimming and mechanical tinkering. During WW2, Cousteau was in a spy ring as part of the French Resistance and during that same time, developed the ‘Aqua-Lung‘ with Émile Gagnan. It was debuted in 1948 when the two engaged in the first underwater archeology project involving divers using what is now called ‘SCUBA’ gear.  He, his team, his mission, and his ship Calypso were popularized in the hit TV series The Undersea World of Jacques Cousteau, which opened the world’s eyes to the wonders beneath the waves.  In sea water, one is nearly weightless  — but not so on land. Hélàs, out of the water, we are well-aware of our weight.  If you want to do something to transform your body, join me in Fasting 2 days each week.  It can make a big difference.

The featured breakfast uses flavors popular in Southern France: salt cod and garlic. . Put them in eggs for a taste of the sea from Marseille, Cousteau’s home port.  Dinner puts the fish in a ‘boat’: a tip of the hat to finned sea creatures and to Cousteau’s famous ship.

The night before:  Soak the salt cod in water for 30-40 minutes, until softened. Mince and combine with the garlic and lavender. Next morning: Heat a cast iron or non-stick pan and spritz it with oil or cooking spray. Whisk the eggs with the flavorings and pour into the hot pan. Instead of scrambling it, allow it to cook until the bottom is cooked and the top is firming up. Gently flip it to the other side to cook briefly. Plate with the tomatoes. Serve with the beverages of choice. 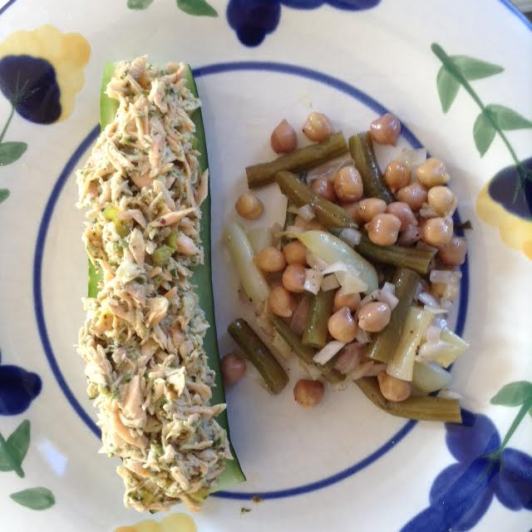 Slice the leek and blanch until soft  in a little water in the microwave. In a bowl break up the salmon and combine with the sauce, mustard and leek. Slice the cucumber in half lengthwise and scoop out most of the seeds with a melon-baller. Mound the salmon into the cucumber boats and plate with the 4-bean salad.

Join 326 other followers
Follow Eating well, with creative recipes, to follow the Fasting Lifestyle according to Michael Mosley's "Fast Diet." on WordPress.com