Philadelphia, The City of Brotherly Love.   In 1682, William Penn received a charter from English King Charles II to establish a colony in the American wilderness.  Penn envisioned a haven for his fellow Quakers who were distrusted at home because they would not adhere to the Church of England.  The new colony became Pennsylvania [‘Penn’s Woodland’] and the initial settlement was on the banks of the Delaware River.  True to his peaceful principles, Penn made a treaty with the local native people instead of treating them with contempt. [Depicted in Edward Hicks’s famous Peaceable Kingdom.] Quakers and other religious dissenters flooded to the colony, and by 1787 Philadelphia was the largest city of the new  land. Few cities are so tied to the emergence of our nation, and today tourists flock there to see Independence Hall, the Liberty Bell and the Franklin Institute. Modern attractions include the Philadelphia Museum of Art [Rocky ran up the steps], the public parks, the colleges and universities, the sports franchises, and the long list of locals of movies filmed there.

When the topic is food, two things come to mind: scrapple [a mixture of cornmeal and pork which is sliced and pan-fried] and Philly Cheese-Steak. Our breakfast eggs will be flavored with scrapple, a simple treat.  The Cheese-Steak, a favorite since the 1930s, is always served on a hoagie roll often with Cheese-Whiz.  But the roll has got to go on a Fast Day, and Provolone was the original  cheese in the meal, [besides, I wouldn’t have Cheese-Whiz in the house!] so we cook it in the traditional way and serve it en casserole with a cut-out of famous Pennsylvania bread on top in the shape of the famous Liberty Bell.

Scrapple Bake:  290 calories  7.4 g fat  6 g fiber  14 g protein  39 g carbs  220 mg Calcium GF Scrapple is one of the specialty foods of the “Pennsylvania Dutch” people of South Eastern Pennyslvania.  Excellent for breakfast, served as a side dish like sausage or combined with eggs in this bake. 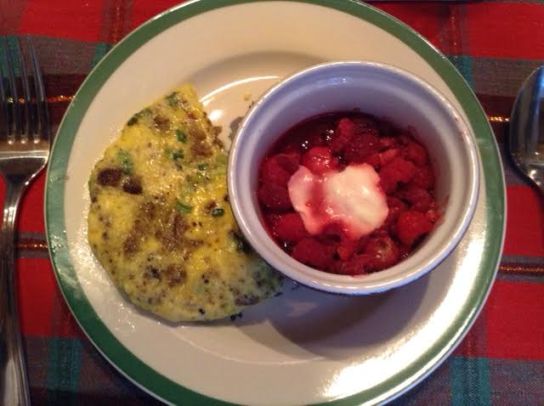 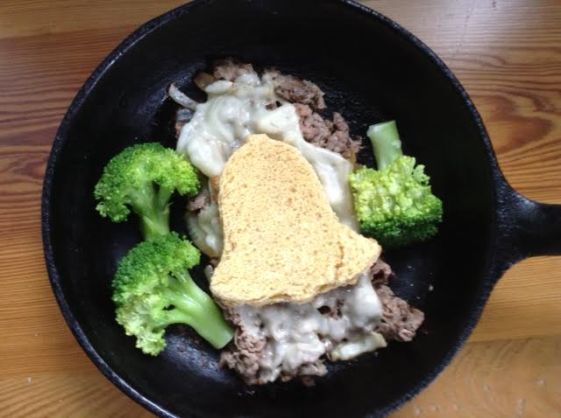 In a small skillet sprayed with non-stick spray, cook the onions in a little water until they are limp but not browned and set them aside. Take a slice of Martin’s potato bread and cut out a bell shape using a 3-4” cookie cutter. Lightly toast the bread. Add the beef to the pan and cook the meat while chopping at it with a metal turner. Add the onions when the beef is grey-colored and soft. Boil/steam the broccoli while the meat cooks. Lay the cheese over the meat and take off the heat. The cheese will melt onto the beef. Make room in the pan for the broccoli and top with the bread bell. Enjoy your taste of Philadelphia while you hum the theme to Rocky.