On March 29, 1912, English explorer Robert Falcon Scott wrote in his diary, “The end is near.”  He and his men were camped on Antarctica after a failed attempt to be the first to reach the South Pole. Discouraged after being beaten to the Pole by rival Roald Amundsen, the British Antarctic Expedition members were exhausted after dragging their equipment for 1000s of miles on scant rations. A blizzard trapped the three remaining team members in their tent only 11 miles from a food cache. Although they died of hypothermia, frostbite, and malnutrition, a major contributor to their deaths was scurvy. It was known since the 1700s that citrus fruits cured and prevented scurvy.  British sailors were given juice from fresh lemons and then limes [British sailors were known as ‘limeys’] which removed the scourge of scurvy by adding Vitamin C to their diet. Had Scott’s men had access to Vitamin C [onions, cabbage] and fresh meat [as Amundsen’s crew did]; had the weather not been dreadful; had their fuel tins not leaked, they might have survived.  Today, we will eat citrus fruit and ponder the sad deaths of members of the Antarctic Expedition.

Citrus Breakfast:  290 calories  1.6 g fat  3.6 g fiber   21 g protein   48 g carbs [38 g Complex] 289 mg Calcium   PB GF  Is this the breakfast you imagine when you think ‘go on a diet’? Does it look like starvation rations? Banish those thoughts! Delicious, nutritious, and filling, this is a great breakfast for anyone, anyday. And it has tons of Vitamin C and A and D, from the food as well as from the fruit smoothie and the milk in the coffee. 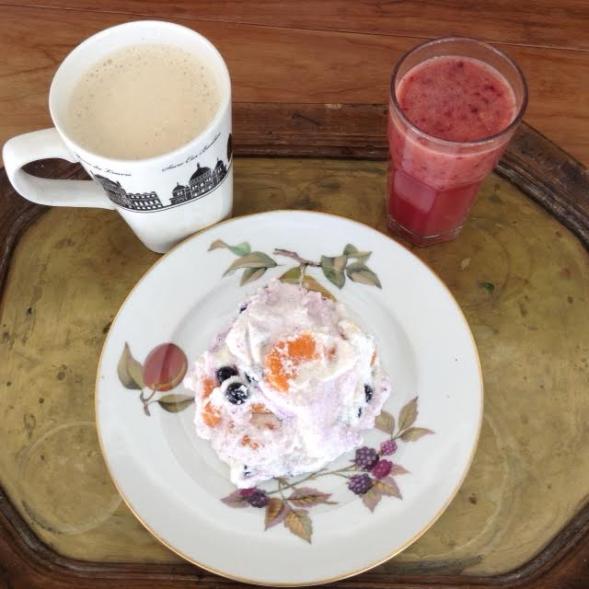 Combine all the dairy and fruit [or combine the dairy and garnish with fruit after plating]. HINT: Knowing that I would have a busy morning, I did this the night before and refrigerated it. Great for a grab-and-go meal. With the hot beverage and smoothie, it is a vitamin-blast.

Chicken with Limes: 283 calories  7.2 g fat  3.3 g fiber   23 g protein  35 g carbs [29.5 g Complex]  61 mg Calcium   GF  Limes, chicken, and pineapple were added to the ecosystem of Tahiti by various visitors, and were promptly incorporated into the cuisine. We served this at a dinner party and no one would guess that it was a Fasting meal. Here is the one-serving method for Poulet avec Limettes.

Marinate the chicken in the lime juice, zest, salt, pepper, and thyme in the ‘fridge for at least 2 hours. Remove the chicken from the marinade, and put 1/3 of the liquid into one small container and the remainder into a sauce pan. We grilled the chicken briefly and then removed it to a plate while the pineapple grilled. If you are not grilling today, put the pineapple under the broiler until hot all the way through. Meanwhile, add the stock and chicken to the pan with the marinade and heat it until the chicken is mostly cooked. Remove the chicken and keep warm. Bring the liquids to a boil and reduce by 1/3 of the volume. Combine the sugar, cornstarch, and remaining marinade. Reduce the heat and heat until thickened. [this happens rather quickly] Return the chicken to the pan, add the cream, and stir to combine and to coat the chicken with the sauce. Plate with the rice and pineapple and lime slices for a taste of Tahiti.